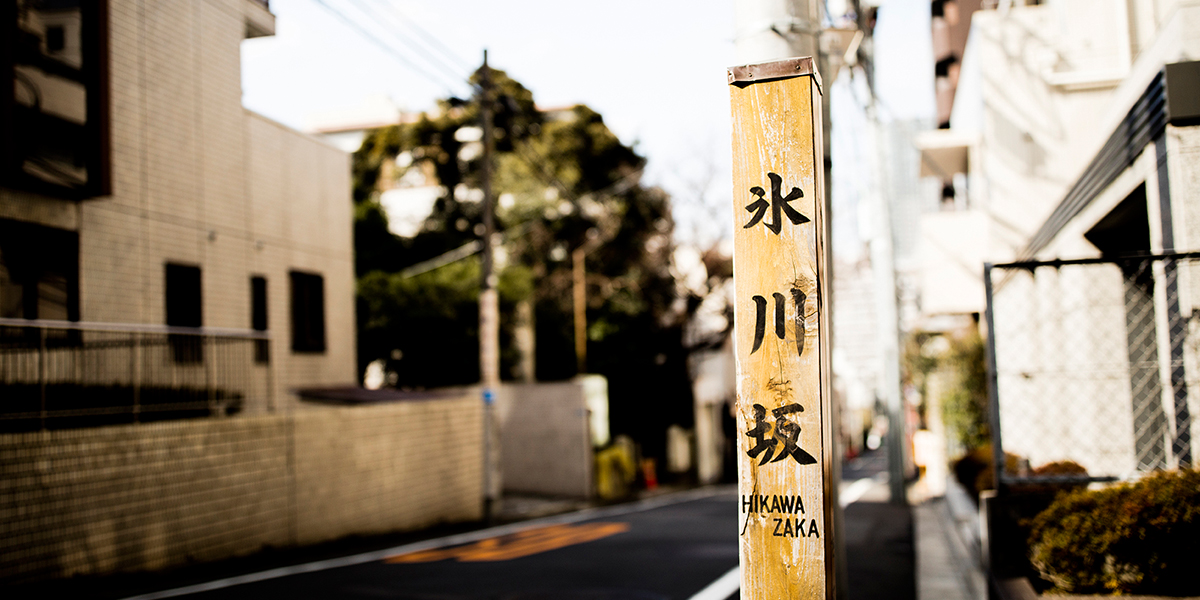 The name “Akasaka” means “Red Slope”. The town has so many slopes, it even has the word “slope” in its name!
Just counting the major slopes, there are some 19 slopes in Akasaka.
And there are as many different origins and stories behind the names of these slopes.

①Sanbunzaka
This slope is said to have gained its name because its steepness caused the car toll to be raised by one-third (san-pun; approx. 100 yen). Another theory is that the name refers to part of the carriage fee paid at the bottom of the slope.

② Yagenzaka
Yagenzaka (“Druggist’s Mortar Slope”) was given this name because the slope’s shape—high of both sides with a depression in the middle) resembles a druggists’ mortar. Local residents have also referred to the slope as “Naniuemonzaka”.

③ Tangozaka
It is estimated that this slope opened in the first year of the Genroku Era (1688 – 1704). At that time, the residence of famous samurai Yonekura Shigetsugu (also known as Nishio Shigetsugu) stood on the north-east side of the slope.

⑤Nambuzaka
This slope is famously mentioned in the Tale of the 47 Ronin, this slope is said to have been so named because the second residence of the Nambu Clan was located here during the early Edo Period (1603–1868). Later, the name was sometimes written using Chinese characters meaning “Difficult Walking Slope” because of the slope’s steepness.

⑥Inarizaka
Entsu-in Temple is located in the north at the bottom of this slope, and the slope received its name because of the gate to the Shinto god Inari was located on the temple grounds. The slope is also called “Sojizaka” (“Cleaning Slope”) because there was a settlement of Edo Castle cleaners at the top of the slope.

⑦Ushinakizaka
Meaning “Cattle Bellowing Slope”, the name of this slope derives from the sound of cattle bellowing in distress as they tried to pull carts along Atsugi Road, which passed through Akasaka to Aoyama and was in very poor condition. The slope is also known as “Saikachizaka”.

⑧Danjozaka
The residence of the Matsudaira Lord of the Yoshii Domain is located in the western side of the slope. Lords of this domain were frequently appointed to the position of Danjodaihitsu (senior assistant president of the Board of Censors), hence the slope’s name.

⑨Hikawazaka
This slope rises from directly in front of the Hikawa Shrine, which was built as the personal Shrine of the Eight Shogun, Tokugawa Yoshimune.

⑩Korobizaka
Since the Edo Period (1603–1868), the road on this slope was in poor condition, causing people walking up and down the slope to trip and fall, hence the slope’s name, which means “Stumbling Slope”. At one time, Motohikawazaka (next to Seitoku-ji Temple) was also known as “Korobizaka”.

⑪Entsujizaka
This slope takes the name of the temple (Entsu-ji) that was moved to the top of the slope on the southern side around 1695. Previous to this, a different temple with the same name was located on the site.

⑫Kinokunizaka
The slope is so names because the Kishu (Wakayama Prefecture) branch of the Tokugawa Clan had a spacious residence on the western side of the slope throughout the Edo Period (1603–1868). This slope is also believed to have been the origin of Akasaka.

⑬Nogizaka
After the death of Count Nogi Maresuke by ritual suicide in September 1912, the name of Yureizaka (“Ghost Slope”) was changed to Nogizaka.

⑭Hinokizaka
The residence of the Mori Lord of the Yamaguchi Domain was once located on the side of this slope. During the Edo Period (1603–1868), the residence was known as the “Hinoki House” because of the large number of hinoki (Japanese cypress) trees growing on the grounds.

⑮Shinsaka
The name “Shinsaka” means the slope was the “new” slope at the time it was opened, but it was actually opened a long, long time ago, in 1699.

⑯Kuroguzaka
This slope received its name because Akimoto Kurogu, an ancestor of Akimoto Hachirozaemon (the headman of Hitotsugi Town during the Edo Period) once lived in this location.

⑰Sakurazaka
Newly built in the middle of the Meiji Period (1868–1912), this slope was named for the huge cherry blossom trees that grew at the bottom of the slop until they were destroyed by bombing during WWII.

⑱Reinanzaka
The Reinan Hermitage of the Takanawa’s Tozen-ji Temple was located here during the early Edo Period (1603–1868), and the slope takes the name of its founder, the priest Reinan. However, sometime during the slope’s history the Chinese character for “Rei” changed from the original “嶺” to “霊”.